Skip to content
My trip to Quito this time was shockingly smooth, despite layovers in both Dallas and Miami and an overly talkative lady next to me on the MIA-Quito flight (I REALLY didn’t want to hear every last detail of all of her childbirths, but I heard them anyway!).   Normally carting numerous bags and action packers full of research gear into Ecuador, my load felt exceptionally light, even with my big backpacking pack on my back and another smaller pack on my front.
As we left Miami, the clouds were illuminated with a faint orange glow of the lingering sunset below a brilliant full moon.  I tried to look as occupied as I could in my Ecuador travel guide as my friendly neighbor told me her whole life story.  Fortunately, she eventually either ran out of things to tell me, or decided to let me read, and I tried to plan my free day in Quito.  I’m not sure how far I made it, but I woke up to the thud of my book falling on the floor.  Surrendering to the exhaustion and remnants of a hangover from a late night and FAR too many shots the night before, I slept HARD the rest of the flight.
I woke up again to my friendly neighbor, this time telling me it was time for me to put my seat back upright in preparation for landing.  Although initially a little annoyed, I’m so glad she woke me.  Eyes heavy, still half asleep, I looked out the window.  That’s when I saw it.  Or am I imaging things?  I rubbed my tired eyes. No, it can’t be mistaken.  It rises brilliantly even through the darkness, the snow capped peak almost blending in with the clouds.  Cotopaxi.  Even at night it stood as majestic as I remembered.  There is something about it that just captivates me.  I watched it as it left my field of view and was replaced by Chimborazo, the highest peak in Ecuador.  Although higher than its sister peak by about a thousand feet, the near perfect symmetry of the Cotopaxi volcanic cone is utterly captivating.  I cannot explain it.  All I can say is that since I first set eyes on it last October I’ve been a fixated.  Now I return to climb it.
Arriving in Quito at 11:30 PM, I’m thankful that this time around I have a prearranged taxi driver waiting for me.  It was such a relief to walk out of customs and see a small sign rising from the crowd of people with my name on it.  No hailing a cab, no being beckoned by unmarked taxi drivers, no uncertainty whether the taxi driver knows where my hostel is.  After all, my Spanish isn’t that great….yet!
Although it’s 2 am by the time I get settled into my hostel, I head up to the balcony to quickly jump on the WiFi and am greeted with a gorgeous view overlooking historic “old town” Quito, with the towers of the Basilica del Voto Nacional lighting up one end of the horizon and the 30-meter statue of the Virgin of Quito on the hill on the other end: 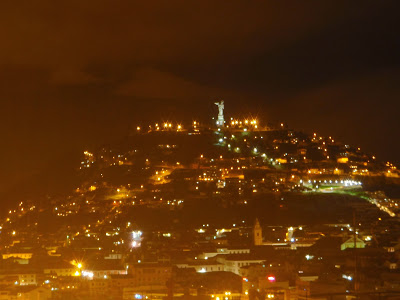 Motivated by my proximity to all the must-see old town sights and a desire to get going on my acclimatization, I decided to do a walking/jogging tour of old town today.   As a compromise for doing the tour on foot, I left all valuables (including my camera) in my hostel.   I was determined to not be mustarded (v. to have mustard, ketchup or other liquids squirted on you in an attempt to rob you, a common tactic in Ecuador), but unfortunately that meant no pictures of this adventure…. 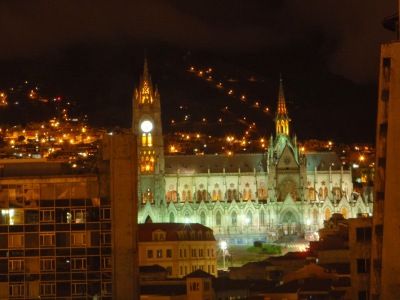 Starting at the Basílica del Voto Nacional, I climbed up to the top of the 115 meter towers on either side of the Basilica to take in the views of Quito.   Thankfully I’m not bothered by heights because the stairs and metal ladders up to the top were quite sketchy.  Let’s just say there’s no way that would be allowed in the states.  At one point a lady in front of me got half way up a set of steep, shaky metal stairs and froze, saying “no puedo”, which I proudly understood as “I can’t” and proceeded to have a good laugh with her and her friends (once she got back down, of course).

Among other notable old town sites was “La Compañia” (aka Quito’s Sistine Chapel), an incredibly ornate church that contains seven tonnes of gold on its ceiling, walls and altars.  For a moment, I almost felt like I was in Rome.  Although beautiful, I quite frankly found it over the top– an in-your-face example of opulence.  My favorite part was a painting of hell, depicting sinners labeled with each of the deadly sins receiving horrifying punishments.
I ended the day with una cerveza y encocado mixtos at a restaurant overlooking Quito.  Although the encocado did not even come close to what you can get at William’s in the Galapagos, a good dose of local Aji hot sauce on top hit the spot.  It feels great to be back and was fun to actually explore Quito a bit this time around.  Tomorrow, I head south along the “Avenue of the Volcanoes!”

1 thought on “Return to Quito”