Less cactus, more trespassing!  But I’m getting ahead of myself.  What the heck were we doing romping through fields outside Riobamba?!?

We left Baños at 7 am to head to Riobamba.  I was tired and sore (from climbing and not enough sleep), but excited for bike riding down the slopes of the Chimborazo volcano!  And the sun was finally peaking through the clouds, so the weather was looking like it was going to be perfect!

Thanks to the clear weather, I had beautiful views of the Tungurahua volcano.  Tungurahua is an active stratovolcano just outside of Baños that last erupted in July!  Fortunately, there was no major activity of the volcano while I was there… 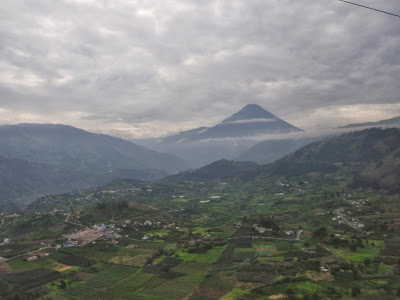 And as we approached Riobabma, we had great views of Chimborazo (the highest peak in Ecuador @ ~20,500 feet): 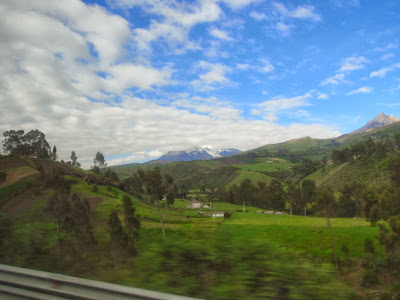 Seeing the peak, I was getting super excited for my bike ride down it’s slopes: 35 miles of riding from the refuge at ~16,000 feet to the city of Ambato at 8500 feet!!  A little climbing, but mostly downhill through beautiful landscapes!

However, when we arrived in Riobamba, we found out that the school never made the reservations with the agency.

So we had to change the plans around so that I could do the ride tomorrow, staying an extra night in Riobamba.

Trying to make phone calls and discuss how to rearrange my plans in Spanish along the busy, noisy streets of Riobamba, I found myself for the first time extremely frustrated. Can we just speak in English for a minute?!?!? It was stressful to try to figure out all of the logistics, and between my comprehension and the noise, I was having trouble understanding what was going on.  Although I had only just arrived, I was already ready to get out of this city!

So when my teacher asked me, “que quiere hacer” (what do you want to do), without hesitation, I answered “quiero caminar” (I want to hike!).  I bet she’s starting to wonder if I ever want to do anything else!  She’s a trouper though…

So we returned to the travel agency to get recommendations on hikes.  While I was discussing the ride tomorrow, I missed most of the conversation, but it sounded like my teacher received information on a great hike to a lookout over a lake outside of town.  I didn’t realize that “hike” was clearly being used a bit loosely….

We arrived in the town of Colta and headed down a dirt road towards the hills.  My teacher told me that this town is where the historical Quito was located before the Spanish arrived.  There were many old, deserted buildings that made it feel like a ghost town.

However, soon we were in the countryside, surrounded by farmland cultivated by indigenous Kichwans.

And soon my teacher was heading off through the farmland.  Apparently, the only way to the peak we were headed to was directly through the fields! 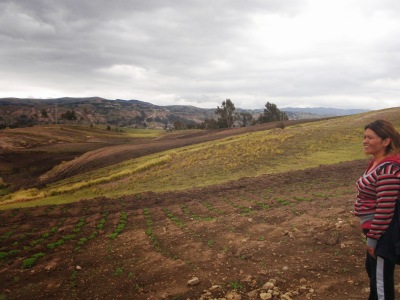 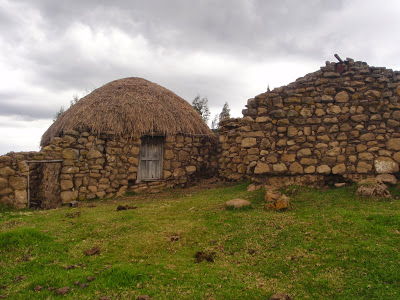 The American in me felt bad the entire time…I kept asking her “Esta bien?!?”  The dogs, pigs, sheep, roosters, and donkeys (yes, donkeys!) announced our presence at every new residence, making me feel like a trespasser!  Although I couldn’t help but be a bit amused inside over the sound of the donkeys…. 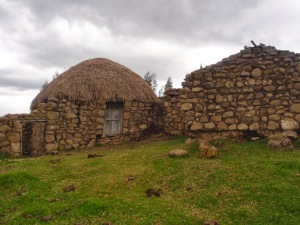 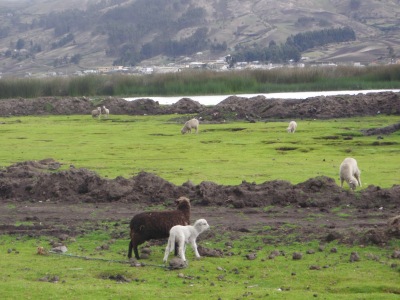 And the views were well worth it!

When we made it to the top, we stopped to have lunch, and I ate by far the weirdest sandwich ever!  I had ordered an Italian sandwich, but instead I received a “vegetarian” sandwich.  Which consisted of 2 kinds of canned olives, canned mushrooms, canned corn, lettuce, tomato and cheese with enough mayo to make Jimmy John’s sandwiches seem healthy!! I have to say it was pretty gross, but I was happy to have food and take in the views nonetheless…

Despite an admittedly frustrating day, we definitely made the most of it.
Ice cream and some good laughs this evening over a “hola guapa” (incidentally the first word in Spanish I ever learned…turns out tall blond women turn heads in Ecuador) and seeing aerobics in the park also didn’t hurt 😉
Excited for actually doing the bike ride tomorrow and hoping the weather holds up!